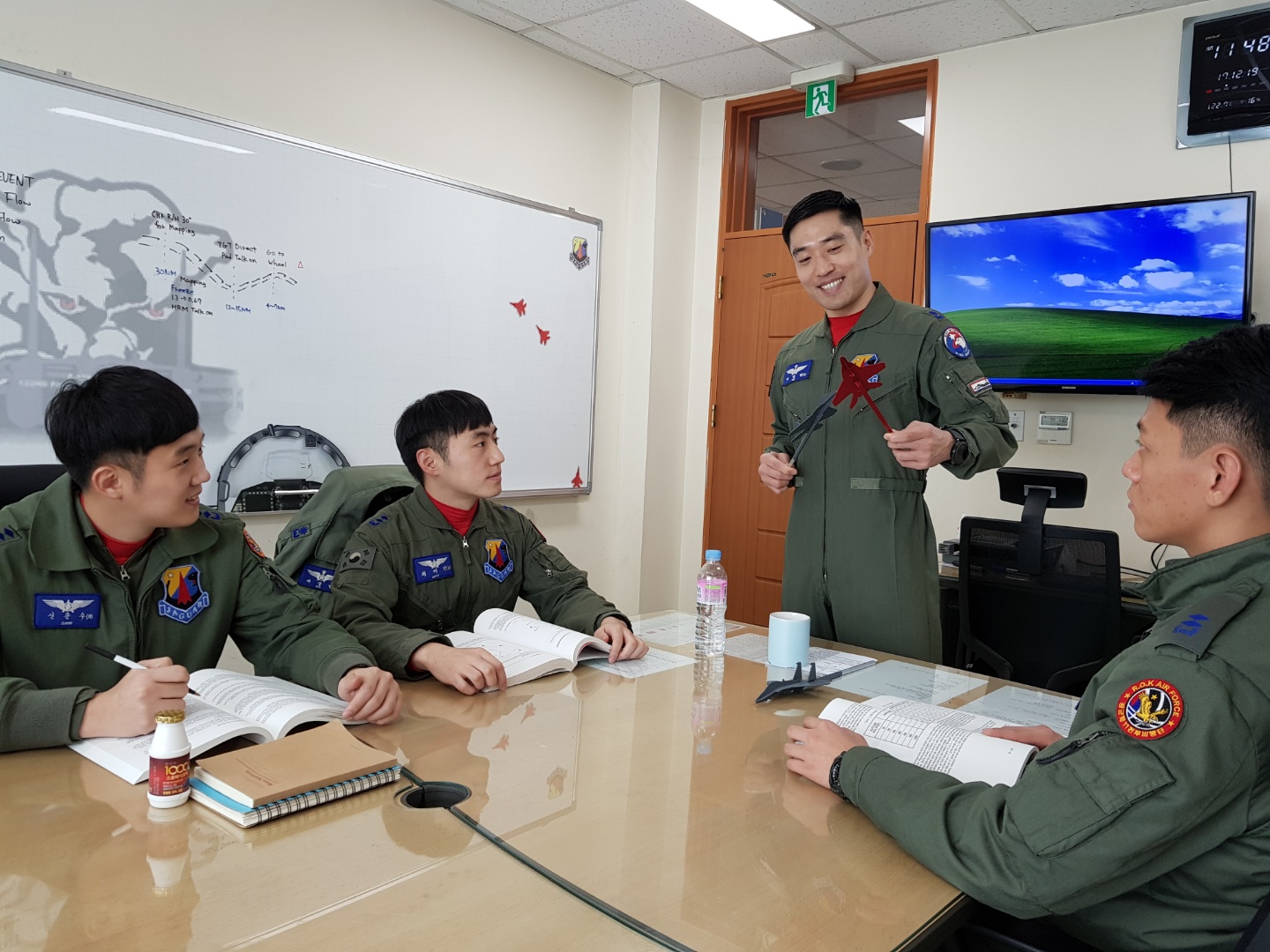 1. Hello, Major Bae Joong-beom, it's nice to meet you like this. Please introduce yourself.

Hello? First of all, it's an infinite honor to invite me to an interview that only IMBA graduates/students like Kirasung can do. Thank you. I am currently a major in the Air Force and I am serving as a combat pilot in a combat squadron based in Chungcheonog. I graduated from the Air Force Academy in 2006, was commissioned as a second lieutenant in the Air Force, and have been in the front-line combat air force until now. I flew the F-15K in Daegu for about 10 years and participated in various operations/training as an instructor pilot, was selected as the latest stealth fighter introduction pilot in 2017, received instructor training in the U.S., and have been deployed to the Air Force.

I think it is one of the great luck in life that I met many great professors and classmates after entering the 35th class after encountering a good opportunity of IMBA course at Sungkyunkwan University in 2020. Although the number of direct attendance and exchanges was small due to COVID-19, it seems to be the advantage of the 35th, which is famous for being a direct hit by COVID-19, as colleagues miss each other's meeting and care for each other.

The curriculum was excellent, but I learned a lot from the life of my fellow students who are acitve in various classes of society, and I gained motivation to be more positive and active in the rest of my military life.

2. Is there a reason why you chose the Air Force among various fields such as the Army, Navy, Air Force, and what made you become a soldier?

I think my career path was decided when I was in high school. It's quite early to decided on a career path in life, but on the contrary, it seems to be an important time that can have a significant impact. I thought about my medical career because I had good grades when I was a student, but I fell in love with the charm of uniforms worn by seniors and seniors who came to promote my school in the second year of high school. Originally, my dream was not to be a soldier, but I went to a police college and drew my dream of becoming a police officer, but the purpose of training national talent and the curriculum of university education were similar, so I prepared for the entrance examination of both schools. The reason why I chose the Air Force Academy among the Military/Navy/Air Force Academy was greatly influenced by career stability and professional living conditions in the consultation process with my homeroom teacher, and I think the Korean drama "Air Force" that aired at that time also played a part. If Top Gun 1 had been released at that time, I would have been more motivated, but I don't think I had seen Top Gun 1 at that time.

And I don't think I could have imagined in those days that I would be in the Air Force for such a long time. In the end, I finally passed the Air Force Academy during the entrance examination process and entered the Military without attending the high school graduation ceremony in 2002, and I have been in the Air Force through many twists and turns. I think I wanted to quit more than 100 times in the middle because it didn't suit my aptitude, but looking back now, I think I couldn't quit because I didn't have the courage to quit. I still have a lot of lingering feelings about the police, but I'm trying not to regret the path I've walked now, thinking of the verses in Frost's 'The Road I Didn't Go'. First of all, I don't think of the mission of a soldier as a job, but as an essential element for the nation and I think it's an honor to be able to dedicate my youth to the people and the country. I'm getting older and it's time to step down from the front line of controlling fighter jets, but I think I can proudly tell my son about the memories of conquering the sky and protecting Korea with the strongest fighter jets when I was young.

When I was working in Daegu, I met my current wife, a junior officer, when I was a captain, and now three families are living happily with my 8-year-old elementary school son, who cares a lot about my flight schedule and flight safety, and I feel sorry for my wife and son who give up every time.

As an Air Force officer, as a stater official and a public official, many restrictions, duties, and responsibilities follow, but I am getting used to pursuing and enjoying understand happiness. I don't have the wealth of a fortune, I don't have much power, but I still like the restrained life of a silent devotion to the nation and its people and not ashamed of their uniforms. For your information, I used the word moderation, but I'm not good at controlling alcohol yet, and it's good to play that much. 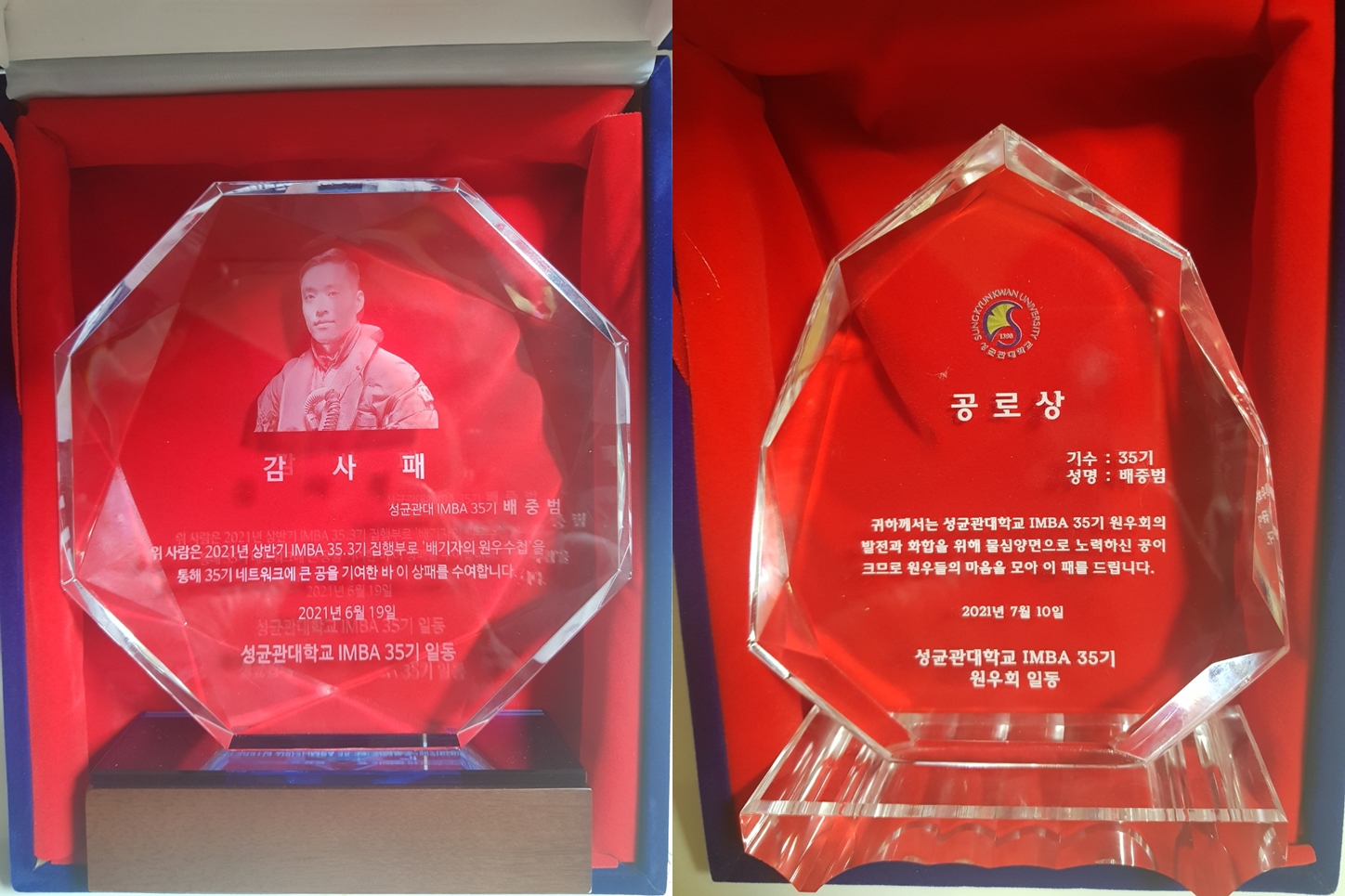 3. I heard that you were working in the Air Force and faithfully engaged in the IMBA course at the Graduate School of Business. Were there any difficulties in studying and doing the same time?

As an Air Force combat pilot and non-major in business administration/financial accounting/marketing, the area of new studies has always been a challenge. I had the pleasure of learning new things, but it wasn't easy to read overnight, and besides, I always had to do ground work and field training, so it wasn't easy to switch modes, and I always fell asleep early at night with fatigue. The excuse that I don't have time is the most foolish excuse, but if I had enough time, I wanted to explore each subject deeply, but I regret that I couldn't. However, as online classes have been hit directly by COVID-19 since 2020, the obligation to attend on weekends has disappeared and school hours have been earned, but it was also regrettable that I could not network with my colleagues, the core of IMBA.

I was able to continue my studies with military service because of the active support and help of my family, the professional knowledge transfer and coaching of my colleagues who took classes together, and the consideration and teaching of professors. So I was able to complete the marathon for two years, and I would like to take this opportunity to thank you again

There are many times when juniors ask about IMBA and when that happens, I actively recommend it and explain the big advantage. I also introduce my juniors with confidence because I didn't have any regrets the IMBA course, but it is sad that there are no Air Force pilot juniors in my current school year. (From the perspective of juniors who saw my daily life, I think that what I recommend had a negative impact ^^)

4. What is the most memorable thing about your school life?

In fact, less than 10 times of direct attendance at school due to the direct impact of COVID-19, and a bundle of parking tickets that were hoarded at the beginning of admission remains in the car.(Can I get a refund? I don't know if I should sell it to the carrot market) There are still many longing for school life. In addition, I have completed my bachelor's degree at a special university called the Military Academy, so I have not felt the romance of the campus, which is all the more regrettable. Still, I remember taking a taxi from Seoul to my house in Chungcheong-do, having a daytime drinking party in front of the school by using classes as a means in between.

Most of all, the most memorable moment in the IMBA course was the offline start-up theory(Professor Kim Woo-jin) class in the third semester, and I attended the class diligently for networking with my colleagues, and attended the meeting diligently before and after the class. On the first day of class, I remember telling the professor that I was not interested in starting a business and putting a nail in the professor's chest, and I apologize again. 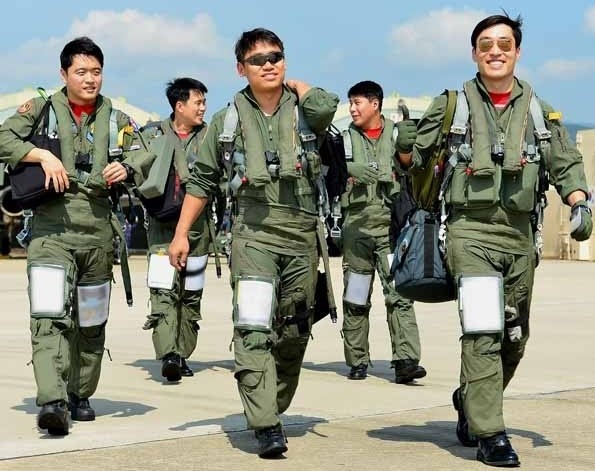 I have been an officer for about 17 years as a fighter pilot. I think I have been positive about my military life through many internal motivations such as the pride of being a man, loyalty to the country, and the style of uniforms, while traveling over the Korean Peninsula and the sea with the latest fighter jets.

In addition, I am proud that I was at the scene of the electrification of a heavy weapon system in the military, and I still feel rewarded for my position as the best instructor pilot who teaches tactics and operational know-how to my juniors. I will be able to devote as much time as I have spent in the military in accordance with laws and regulations, and after that, I will be retired by order. Although it may vary depending on the rank of promotion, I want to live a soldierly and public life in the aesthetics of moderation for the rest of my military life. I don't want to be too greedy, I want to do my best in my duties, pray in my faith, and engage in my future military life. I really want to repay my colleagues with success, but I want to be remembered as a 'real soldier' image rather than a 'successful soldier'.