2020 THE World University Management/Economy 88th and the No. 1 National Private University. 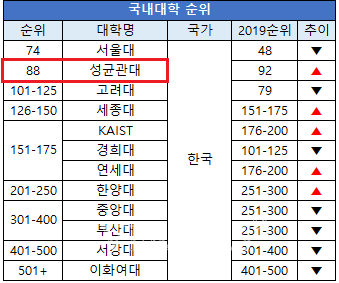 In the ranking of the 2020 THE World University's management/economic sector, which was announced by Times Higher Education (THE), the UK's university evaluation agency, Seoul National University ranked 74th in the overall ranking, followed by Sungkyunkwan University, Korea University, and Sejong University.

Seoul National University ranked 48th in the management/economic sector for the first time in the 2019 ranking, but this year it is 74th, down 26 steps. The number of universities increased from 585 in 2019 to 632 in 2020, and Korea University, which ranked 79th last year, also dropped to 101-125. On the other hand, Sungkyunkwan University ranked second in Korea with 88th place, rising from 92nd place in the previous year.

Sungkyunkwan University, which followed Seoul National University, surpassed Korea University and ranked second in Korea. The world ranking also rose four steps from 92nd to 88th in the previous year, and the overall score also rose from 51.42 to 52.7. Despite the increase in the university's scope, the overall score rose from the previous year, and the rankings rose.

<THE World University Management/Economics Ranking>
THE University Rankings 2020 by subject use the same performance indicators as the world university rankings, but their weight varies slightly. ▲Teaching: the learning environment 30.9 percent ▲ Research, 32.6 percent ▲ Research, research and development ▲ 25 percent ▲ International studies: Comparing the rankings and the weight of the world's universities, the percentage of education conditions increased by 0.9 percent, 2.6 percent of research performance and 1.5 percent of internationalization. On the other hand, the portion of paper applications also decreased by 5 percent.

THE is announcing a variety of world universities, including the world's top universities, the Asian university, the small university, and the emerging university. Although various rankings have the advantage of evaluating universities from various perspectives and providing a large number of choice criteria to consumers, the view that the evaluation institution is nothing more than a "money-making" is dominant in the education system. A university official said, "The rankings announced by university evaluation institutions are only one business after all. It will lead to seminars and consulting in connection with future ranking improvement plans by announcing university rankings in various categories.

The 'QS World University Ranking' is the rankings organized by the UK university evaluation agency QS (Quacquarelli syndromes). It is based on six indicators: academic reputation (40%), graduate reputation (10%), student-teaching ratio (20%), paper recognition (20%), foreign professor ratio (5%) and foreign student ratio (5%).The fact that the reputation surveyed through the survey is 50% of the index is different from other university evaluations.

The CWUR World University Evaluation is presented by the Center for World University Rankings in Saudi Arabia. The research focuses on the quality of education (25%), the level of alumni employment (25%), and faculty capacity (25%), and reflects the h-index patents for the influence of publications by 5% each.It is differentiated from other evaluations through the level of alumni employment that evaluates the number of alumni with CEO positions.

The World University Academic Ranking (ARWU) is presented by Shanghai Transportation University (Shanghai Izao Tong University) in China. The results of the Nobel Prize/Fields Award of graduates and professors are reflected in 30% ( 10% of graduates/ 20% of professors), which is somewhat different from the universities in Korea.In addition to the award results, the researchers (20%) with high frequency of citation of papers by academic field and the researchers (20%) with the publication of papers in Nature/Science-level journals (20%) and the SSCI (Science Index) with the scientific citation index (SCIE)/social science citation index (SSCI) are ranked as the academic evaluation per paper (20%) and the academic evaluation per capita (10%).

The CWTS Leiden Ranking is a ranking announced by the University of Leiden, Ned. Thomson Reuters' DB is used to analyze the four-year paper, and the ratio of the top 1%, 10%, and 50% papers is used in each field, so it is characterized by focusing on academic fields compared to other evaluations.However, because it is a ratio ranking, there is a disadvantage that large universities are disadvantaged relatively.